Lovers of bacon unite, it would seem to be somewhat official that we’re getting mouthwash that actually tastes like real bacon! If this is a dream come true for you, then the fact that it may actually be a legitimate, real thing should be enough for you to remain hopeful.

Should I Believe the Bacon Hype?

Though Scope released a video on April Fool’s Day that went way past viral status not long ago and reported that it was just a passive joke, are we fully sure that it really is a joke?

Sure, this whole bacon mouthwash nonsense may just be nonsense, but if it really was just a joke, why does it keep popping up all over the place? If you look on YouTube, you’ll see that the video came out over a number of years, including in 2013, 2014, 2016, and beyond up to this year, being 2018.

What’s interesting about this whole bacon mouthwash concept is that, no matter how much time has passed and continues to do so, it keeps coming up, and not just because bloggers can’t let it go, either!

Stop wondering about bacon flavored mouthwash and start using our directory to find a 24 hour dentist near you fast!

Other Bacon-Flavored Products for Your Teeth 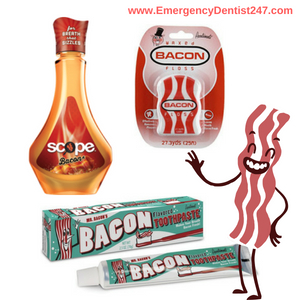 Interestingly enough, we’ve heard of other products for your teeth that are flavored with bacon before. For example, there are bacon toothpicks, bacon dental floss, and even bacon-flavored toothpaste out there.

With these products in mind, it’s definitely no surprise that we’ve heard a lot about a mouthwash product that tastes like pure bacon. Remember, everyone used to think that cinnamon-flavored toothpaste and mouthwash was weird way back when.

There are thousands, if not tens of thousands, of ridiculous ideas for mouthwash out there, including maple, tree bark, and, of course, bacon. Because of this, is it really so odd to think that this bacon-flavored mouthwash rumor is just a myth?

And if you find yourself with a chipped tooth on the weekend, you can find a weekend dentist near you here!

Top 5 Ways to Get Rid of Bad Breath

© Emergency Dentist 24/7 is an informational site providing details about how to find a local dentist, we are not dentists or medical professionals and we do not offer medical advice or do dental work ourselves. We are a marketing company helping connect patients with dentists. 2022.